Hinchingbrooke Country Park has three main habitats - wetland, grassland and woodland – which are home to a great variety of wildlife. Although there are different types of habitat, they all overlap - wet grassland and wet woodland, for example.

The park’s wetlands are made up of two large lakes totalling 36 acres (the Wildlife Lake and the Main Lake) along with smaller ponds, lakes and a brook. 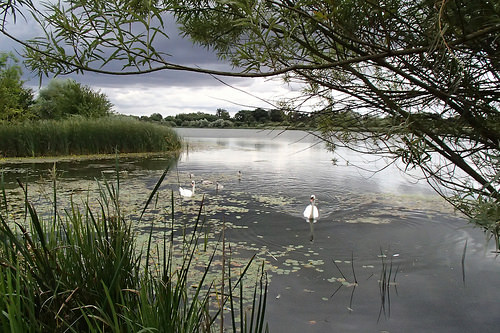 The Wildlife Lake has no public access around the majority of the edges, whereas the Main Lake has access all the way around and a number of benches so you can sit and watch the water birds and reed buntings.

The Ornamental Lake is fairly shallow and sheltered and has a good reed bed where swans regularly nest.

The Wash was dug in 1997-8 as a uniformly shallow water body. It has become a valuable dragonfly and damselfly area, as well as providing a habitat for lots of smaller water life.

Using the spoil from digging The Wash, a raised path was built near the Wildlife Lake and a barrier created behind which an excellent wet area has developed. This benefits from varying water levels and even occasionally drying out. There are several small ponds around the park - one is especially good for great crested newts.

Cormorant, heron, tern, teal, wigeon, coot, moorhen, great crested grebe and great crested newt, amongst many, all benefit from the wetland areas. Water voles were first recorded in the park in 2001 and signs of otters are now regularly found along Alconbury Brook.

Grassland covers approximately 71 acres of the park. The last use of the wild flower meadow was as a potato field! Now it is host to a wide variety of wildlife and plants such as:

The grass outside the Visitor’s Centre is kept short for recreational use, although the rangers rarely have to cut it since the rabbit population acts as effective lawnmowers!

In 1989 the wet area of grassland was grazed. The main area of meadowland was planted with a mix of wild flowers and slow growing grasses in the late 1980s, to replace the arable crops previously growing.

There are no records as to when Bob’s Wood was planted, but estimates are in the region of 100 years ago. It was planted as three rows – larch, oak and hornbeam. The oak was felled for boat building during the war and the majority of the larch has fallen due to its shallow root system. Today Bob’s Wood is dominated by hornbeam.

Standing dead wood is maintained as much as possible because of its value for wildlife. Fallen or cut wood is often stacked into piles to provide habitats for invertebrates and small mammals. A dense shrub layer within woodland is encouraged, providing cover for wildlife. In Bob’s Wood and other areas there is ongoing clearance and replanting to increase age structure and species diversity. The rides and footpaths through the woods allow light to reach the floor which encourages more species to grow, thus improving diversity.

Birds and wildlife regularly spotted in the woodlands include Muntjac deer, foxes, rooks, sparrowhawks, rabbits and all three species of woodpecker – green, greater and lesser spotted.

By clicking continue, you are consenting to us setting cookies. Some of these are necessary to make the website function, but others control settings and monitor statistics through Google Analytics. We do not store personal information. If you do not want these cookies to be set, please click 'Find out more' to control cookie settings.